Ms. Sylvia has been asking me to go see her new house since they first found out they were getting it a couple of weeks ago. Things kept coming up and I had never gotten around to it...even when she invited me over for dinner on Christmas day.

Now that I'm done traveling for the holidays, I asked if I could swing by. She eagerly said, "Of course!" and promptly invited the rest of our staff so we could eat, play cards and just hang out--such a gracious and welcoming host...but that's just Ms. Sylvia.

She had shown me pictures of her house from her camera phone. She has talked and talked about how beautiful it is. Still, nothing prepared me for how wonderful her home is! It's brand new! It's a great size for her family of Sylvia, her husband Bernard, and the two kids. It has an awesome laundry room, a two-car garage, big rooms, bathrooms, and closets, and an amazing front and back yard. If I weren't so happy for them, I'd be completely envious!

I've had my fair share of frustrations with the Dallas Housing Authority (DHA) and their upkeep (or lack thereof) in Turner Courts. But I must say, if this is what all of their Family Self Sufficiency homeownership program participants receive (and I believe it is), I am very impressed.

Homeownership: DHA is moving families to homeownership through its Housing Choice Voucher (HCV) Homeownership and Resident Opportunities for Support Services (ROSS) programs. The HCV Homeownership program allows first-time homebuyers to use vouchers towards the purchase of a home. The homeownership division holds ongoing seminars with clients, vendors, realtors, investors and property owners. Topics range from qualifying for a loan to financing and credit repair to fair housing practices.

Sylvia and Bernard are taking every opportunity to be wise and knowledgeable homeowners and I am SO happy for them!! 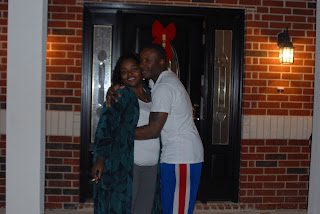 I loved everything about their new home. But although their home is wonderful on the outside, Sylvia and Bernard make it even more beautiful because of who they are and what they bring to the inside.
Posted by Janet Morrison-Lane at 7:18 AM 1 comment:

And how did you spend your Christmas holidays??

It's amazing what connections can be made at Starbucks! (ok...well, maybe that's an excuse. :) ).

A couple of weeks ago I met a friend of a friend for coffee. We both had similar desires to see kids get into college and be successful. From that meeting, we planned a College Prep Day. As I talked to parents and invited teenagers, I was pleasantly surprised at the number of teenagers who said they were coming.

I was quickly disappointed when I called to confirm with each of them the day before the event. There were many different reasons..."I forgot"..."My daughter's sick"...

Then the day of the event..."My brother went to work with my dad"..."She had to watch her younger sisters and brother because her mom had to work."

The great thing, though, was that as some people were backing out, the ones still coming asked, "Can I bring a friend?" Plus, some kids I'd forgotten to remind...and forgotten were coming...showed up right on time.

By the time we started this morning, we had 11 middle and high school students and 6 college students (all who have been involved with Central Dallas in the past and were there to volunteer).

The teenagers asserted themselves as they did introductions:

Thought about what to write in their essays:

Learned how to mind map:

Created their own mind map:

Talked about their college experiences:

Overall, it was a great day!

There may have "only" been 11...and they may not have been from Turner Courts (well, a couple of them used to live in TC)...but there were 11 students there *and* 7 college students who have been where those 11 were.

Besides, I've learned that 1) you've got to start before you can build something and 2) it takes time to build trust and rapport...especially for something like college...when most people go into neighborhoods like Turner Courts assuming that kids just need to "stay off the street" and wouldn't be interested in college or academics. I also know that every person was there because of that relationship and that trust and rapport that's been built...and started with many of them at 2 or 3 years old!

I'd say we're off to a good start. Anyone interested in helping me keep it going?
Posted by Janet Morrison-Lane at 4:56 PM 2 comments:

Going home for the holidays can be a lot of fun--seeing friends and family you haven't seen in a while...eating great, home-cooked meals...playing games...watching football... and then, invariably, some conversation related to politics creeps in.

It's always nice to know the facts...AND to be able to communicate those facts to others. The Children's Defense Fund has come up with a great way to help us out during the holidays:

Survive the Holidays and Stand for Children!
We started off 2007 with a New Year's resolution for Congress to act to provide comprehensive health coverage to the more than nine million uninsured children in America. Although we've made some progress this year in bringing this issue to the forefront of the national policy debate, we've still got a ways to go before our country is a place in which no child is denied the right to a healthy start in life.
To help us reach this goal, we need your help! The holidays present a perfect opportunity to discuss with your friends and family the importance of children's health coverage as you gather around the dinner table. To help you in your discussions, we've prepared a Holiday Survival Guide that will help you to respond to any misguided (albeit well-intentioned) friends and family members!
Posted by Janet Morrison-Lane at 9:16 AM 1 comment:

I've been on vacation for the last week...and will blog about that soon.

In the meantime, when I got back last night, I was welcomed with an amazing article in the Dallas Morning News in the Sunday paper (12/16/07), Points section. It’s even better if you read it in the huge spread in the paper with all of the color photos, but these links are great if you missed Sunday's paper.

So many of you have contributed to our After-School Academy in some way or another--monetarily, emotionally, prayerfully, etc. Your presence and/or your support in whatever way you offered it has helped make the program what it is today. Thank you!

We have high hopes of what can happen...not just for the 31 kids who attend the After-School Academy, but for all of the kids they represent...as we move forward and work toward changing the "system" that families battle on a daily basis. With the amazing people that exist in Turner Courts and other places like it, I have no doubt it can be done! 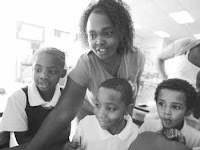 Video:
Lessons in Success video
Posted by Janet Morrison-Lane at 5:41 PM No comments:

Seek out the assets, not the deficits

Spend a little time in an inner city neighborhood. Talk to the people. Get to know people. I would bet after getting to know them you would find out that they rarely talk about what they don't have or what obstacles they have overcome. Instead, they focus on their hopes and dreams for themselves and their children.

Before living and working down here, I didn't get it either. I visited the inner city to do "mission trips." I loved leaving after a day or a week knowing I had "made a difference." I liked hearing the stories of huge turnarounds. I wanted to hear how tragedy turned into some big success story. I wanted to know how this or that organization or person had done something good for people. I wanted to hear about heroic efforts. It made me feel good.

But living and working here is much different.

I have known some people for years before finding out that they were sexually abused as a child or that they were once homeless. I've known kids who have grown up in crack houses and some who raised themselves because their parents weren't willing or able to take care of them. Most of these things were learned inadvertently. The kids knew I knew, the adults knew I knew, but we rarely ever talked about it. It was life. It was reality. We didn't need to dwell on it. They didn't want to dredge up their past...or present...situation for some woman who wouldn't understand what they were dealing with. They did, however, need access to resources so they could move forward.

That's what Central Dallas is all about. People are valued because they are people. I don't have to know their "story." I do, however, want to know where they are headed.

In the After-School Academy, we talk about "noticing" kids. We seek out areas in which they demonstrate talent or interest. We tap into the potential we see. It doesn't matter how much adversity they have or haven't faced. Our concern is for their future.

It's the same for the parents...or others in the community. We don't ask...or need to know...all about their past and how many trials they have faced. If they want to confide in us, they will, but that is their choice. It's not something I probe for.

The "story" isn't that people have overcome adversity. The "story" is that resourced neighborhoods and communities provide opportunities for people to achieve and develop the capacity that already exists in these communities.

Our job is to ask the question, "What do you want for your family?" (and think about what we would want for our own families) and then seek out the resources needed to connect people with they want in order to raise their children in a safe and healthy environment...whether that be a reasonably priced grocery store, lighted streets, job readiness training, academic preparation, adequate policing, etc. That's what I want for my own community. I should expect no less for an inner city community.

Instead of sensationalizing people's lives, we need to do our part to build relationships, find out what people in the commmunity want and need, assist with the resources in whatever way we can, and recognize that with the right resources and with ongoing relationships and support, people can and are moving toward their future.
Posted by Janet Morrison-Lane at 7:50 AM No comments: