My street's flood rating is "excellent"???

At the encouragement of a friend, I just looked on the city's map for the upcoming 2012 bond package that is supposed to reduce flooding. I almost didn't because I was sure my street would be included.

See, my neighbor and I called the city 5 years ago...and even eventually got them to come out and take pictures. You can see my blog about it back in 2007 here: http://janetmorrison.blogspot.com/2007/04/realities-of-life-in-inner-city.html. Look down to the paragraph that starts with "no drainage." I emailed Leo Cheney then. A few years later I went to one of Carolyn Davis's town hall meetings and brought it up again because I noticed that they seemed to be fixing the streets across East Grand where the official Jubilee Park Community Center is. I thought it was odd that they wouldn't come across East Grand. She informed me that there was a bond package and they would be getting to our street...eventually.

Well, eventually hasn't come. I don't know what happened to that other bond package, but now here's another one. Maybe this is our chance. I looked up the map, fully expecting my street to be a yellow or a red line...or at the very most a green line according to this guide:

Instead, my street was given a purple!! See the map here:

Now, if my education serves me right and I can read maps and understand colors correctly, purple is for excellent. That doesn't make any sense to me. When I have visitors over to my house after a rain, they have to leap to get out of their car. In an early morning trip, a friend dropped her keys into the probably 4" water abyss (yes, I just measured it) and then had to reach into that nasty abyss to fish them out since we couldn't see anything in the dark.

Here are some photos so you can see for yourself: 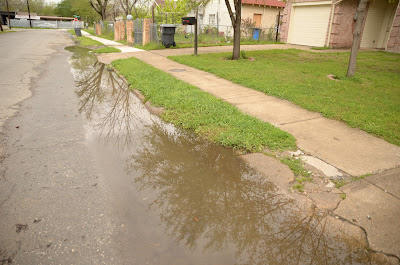 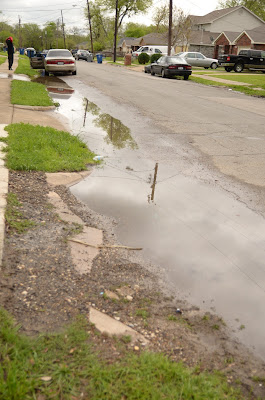 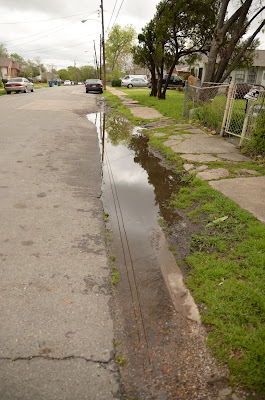 To be fair, I walked on down our street and the further you go from East Grand, the less standing water there is. But just because half of the street drains for the most part, does that mean we on the other half have to deal with standing water, mosquitoes, and the mud and junk it brings to our front door??