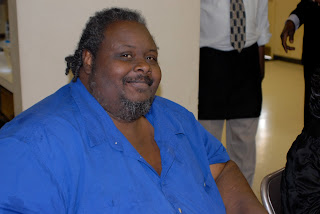 Funerals are reminders. Reminders of the past. Reminders of good times. The little stuff doesn't seem to matter so much on days like these.

Today was Rock's funeral. He was 57 years old. He had heart problems. He had led a tough life.

Rock loved, but he also wanted to be loved.

Funerals seem to wake me up. Maybe I need to figure out a way to remember those things on days other than funerals.

As I sat at the funeral today I began remembering things I'd almost forgotten. We used to go to Ms. D's for Sunday dinner. Ms. D complained incessantly about us being there (that was just the way she was), but she always invited Rock and usually some others she felt like needed something--whether that be friends, family, or food. Looking back, I guess I was one of those who needed something as well. I don't know that any of us looked at it that way. I'm guessing she probably needed us as well. We were all friends. We argued, discussed, played dominoes, teased, watched movies, and felt a part of something.

Listening to people today made me think that Rock was a networker. When Ms. J.R. got up to speak, she told about how Rock was her patient when she was a nurse at our Health Clinic. As she helped Rock deal with his own health issues, he coerced her into helping his neighbor as well. He wanted to connect his neighbors to the same opportunities he had been given. So he called her every time he or someone else needed something.

Rock knew I was an educator. He knew I had gotten all of these degrees in education. He was convinced I could help him, despite my own reluctance. Rock called me when he wanted to learn to read. He was probably in his 40s at the time. He called me when he was afraid his daughters weren't leading his grandkids in the right direction. He wanted to learn to read so he could read to them. He wanted to know what resources were available to help them do better than they were. This is where poverty gets complex and complicated.

If changing things were based on love and desire alone, Rock's heart and love for his grandkids would have wiped away his past and gave him a complete new start. Unfortunately, he had all of the baggage from his past that carried on to his children and affected his grandchildren. Rock had turned over a new leaf and would have done everything in his power to make that same change for his long-time girlfriend and his children. No matter how much he changed, though, he couldn't convince them to do the same. I'm guessing that's why he focused so much on his grandchildren. He wanted to make sure they didn't even start down that same path.

The two grand daughter's I know are now 17 and 18 now. Both have children of their own. A few months ago, Rock called me pleading for me to help them get on the right track and make sure they get what they need so they can go to college. We tried, but our program isn't quite set up in a way that provided what they needed. They needed childcare to go to school during the day. They needed to provide basic necessities for their children. They needed an education. It was complicated. They stopped going to school thinking finding a job was the answer. I didn't think it was, but I didn't have any other good solution either. I feel/felt so helpless. And now that he's gone, who is going to continue tracking me down imploring someone to help his grandkids?? Who is going to be the go-between to plead with them to do better while negotiating with someone else who can possibly offer the help they need??

It's the Rock's of the world who challenge me to press forward and defy the people who say, "You can't change the world." I don't know what exactly I can or will do in the future, but I know I am going to constantly think about and try to figure out how to do more with adult literacy, education, and teen parents. Somewhere, somehow...

Posted by Janet Morrison-Lane at 9:29 PM No comments: