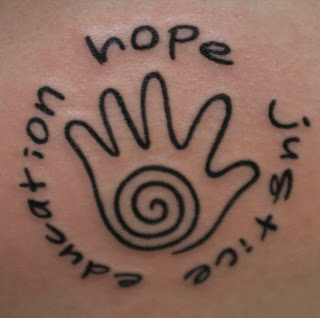 For some odd reason, I still underestimate the power of the WORLD WIDE web and Facebook. With my excitement about being able to leave 2011 behind and start a new year and new possibilities, my friend encouraged me to use my new tattoo as my Facebook profile picture. I hadn't planned on showing the world my tattoo but I put a lot of thought into my tattoo and it has a lot of personal meaning for me so I thought, "Sure! New profile pic and new meaning on life!" So I changed the profile pic, cropped it so you could only see the tattoo (and not the rest of my body) and posted it.

What Facebook doesn't tell you is that they add your cropped photo to your profile, but they also add the original (uncropped) picture to your pictures. I only had a picture of my stomach, but it's still a little more risqué and exposed than I like to be.

I started getting comments on the picture saying, "You got a tattoo???" Seriously, for some crazy reason, I guess I assumed people would think it was just a picture and not me. I started answering coyly at first and have since changed my mind. After all, if you see me in a swimsuit this summer, you'll see it anyway. If you don't, well, that was intentional. I didn't get it for you. :)

However, now that the word is out, I feel the need to explain it so you can understand it's entire meaning.

The hand: I have a piece of jewelry with this hand on it. The card that came with it explains: "This design represents the ripple effect when we touch the lives of others." I have always used the term "ripple effect." I believe we will never know the true ripple effect of the people we touch. It reminds me of It's a Wonderful Life. Take any one of us out of someone's life and their life would be completely different.

Every once in a while one of my "kids" (who are now either in college or graduated from college) will mention something like, "Yeah, I'm helping so-and-so with their college applications," or "No, I don't need any help with my financial aid, [insert former college student's name here] is helping me with that. It makes me happy beyond belief knowing that I helped the former college student with their paperwork and it only took that one little ripple for so many others to get the help they need. What's even more rewarding about this ripple effect is that my neighborhood is one where the percentage of kids going to college is much lower than average so to know how they have begun helping each other and extended beyond my reach is wonderfully satisfying to me.

The words: A while back I emailed a bunch of my friends and asked them to write three words that described me. It was a little awkward for me to ask this but I thought it would help me figure out the words I wanted on my tattoo and I value my friends so much that I thought it would be significant that they were included in creating the tattoo...even though they had no idea why they were participating in my random request. After getting many words back, I categorized them. I didn't want to write things like "stubborn," "passionate," or "writer" on me. I didn't want to label myself. Instead, I thought about the things that made me stubborn and passionate and the content of my writing. I boiled it down to Education, Justice, and Hope.

The placement: I am a brown belt in kung fu. I have learned that if a kick or punch is executed directly on the solar plexus, it disrupts the entire body...to the point of not being able to function. Thus, I placed my tattoo directly on the solar plexus. (No, it wasn't intended to create a target for any of you who might be getting any ideas!) In my mind, the center of my body is the core. Education, Justice, and Hope make up the core of my being. I truly believe if any of those three are taken out or messed with, it will completely disrupt our ability to function...personally and within our society. Eduction + Justice + Hope = Life and Life Change.

So now you know. I thought long and hard about the why behind the what. I wanted it to be meaningful and out of the ordinary. It's because of that, I know I will have absolutely no regrets. Here's to 2012!
Posted by Janet Morrison-Lane at 7:30 AM 2 comments: 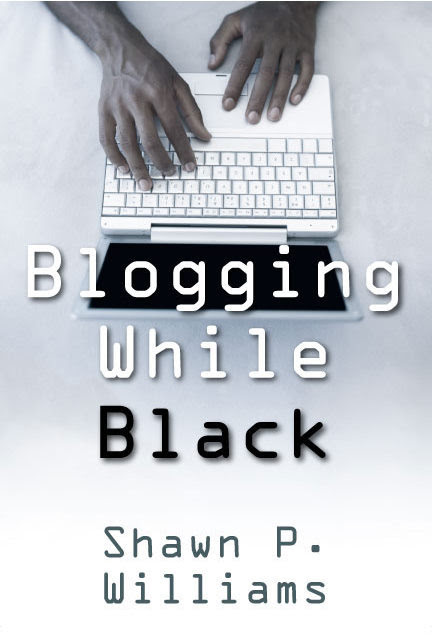 A little over three years ago I met Shawn Williams. It was an unlikely meeting. We were both attending the Democratic National Convention in Denver, Colorado. Blogging had taken off fairly recently and I had gotten sucked into reading several of the local blogs on a daily basis. Shawn's was one of those. As I walked down the streets of Denver, we bumped into a couple of guys who introduced themselves as bloggers with Dallas South. I immediately professed my dedication to reading their blog and as Shawn explains on page 104 of his book, we became fast friends.

We stayed in contact after returning from Denver. I was thrilled to be asked to be on the board of his new initiative, Dallas South News, and since then have been excited to see the release of his new book, Blogging While Black.

What is fascinating to me is how much things have changed in such little time. In 2008, while at the Democratic National Convention, Shawn and I were having conversations about how impressed we were about how cutting edge the Obama campaign was for welcoming and encouraging bloggers at the convention. Blogging was personal. It gave an intimate perspective and allowed information to spread that would have previously been swept under the rug by mainstream journalists. It provided connections.

These days everything moves fast. By the time you purchase the iPad 2, the iPad 3 is right behind it and outdating what you already have. New technology and new ideas are pushed out rapid-fire. It's hard to keep up with the many things whatever new piece of technology offers. Yet Shawn's book captures a moment in time that I haven't heard of anyone else capturing. He talks about what the blogosphere offered and how it allowed he and other common people to get the word out about important issues. His capitalization on this new tool allowed him (and others) to disperse important information and become a 2008 version of inspiring people to take action and become a type of civil rights movement. We became engaged in ways that hadn't seemed possible.

The other great thing about this book is that Shawn doesn't limit these possibilities to himself. The book provides a historical documentation of the blogging efforts challenged America to look at life differently but also provides sections and tips on how "U Can 2!"

I love documentaries and memoirs. Blogging While Black provides the kind of documentation that flows well and provides that historical context that makes me think, "Wow...that's what was happening three years ago??"

Pick it up at Amazon or see Shawn in person at some of the upcoming book signings. If you don't know him already, you'll really enjoy meeting him.