Changing the definition of "normal" 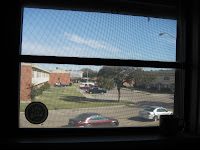 I love having the top-floor, corner office with a window and a view.

Ok...if you must know the truth, my "office" is actually a re-done bedroom in an apartment, complete with used, mis-matched office furniture. I'm just happy I have a window.

My window looks out over Turner Courts, a housing development in South Dallas.

Today I looked up to see a police car drive through...with a second one following him. Two police cars usually mean something's happened. I watched them stop and park in the middle of the street, behind a row of parked cars. It was only then that I noticed the third police car that was pulled into a parking spot and a police officer handcuffing a guy. Seconds later, a fourth police car came around the corner to offer assistance. Nothing big or dramatic happened as far as I could see. After he was handcuffed, they frisked the man. I can only assume they put him in the car and took him away. I don't know. I stopped watching after that.

Although there were a few people who came out of the woodwork to see what was happening, most people continued walking to their destination with no more than a glance his direction.

While sitting in this office, I have witnessed drug raids, car chases, seen arrests, watched people fight, and heard gun shots. It doesn't happen every day, but it happens enough that it doesn't surprise me or seem abnormal. Like the other people, most of the time I just continue walking.

Who deserves for that to be their "normal?"

I wonder how what children see and hear impacts what they believe about themselves and their community. I wonder how it impacts their definitions of "normal."

I also wonder what we, as a society, are doing to make "normal" any different for the kids and families in places like Turner Courts. There are things we can do. Like ...calling our Congress members to pass the SCHIP bill, encourage them to increase funding to 21st Century learning programs, voice your support for drug rehabilitation and treatment for drug offenders in prison...consider hiring ex-offenders...vote for increased funding (and dare I say *equitable* funding) for low-income schools. Each of these provide little effort on our part, but make a big difference in the lives of people in low-income neighborhoods.

Help us change the definition of "normal."
Posted by Janet Morrison-Lane at 1:48 PM