The man behind the soundbyte

What do you know about Martin Luther King, Jr.?

But do you know what that dream was about?

Of course! That, "little black boys and black girls will be able to join hands with little white boys and white girls as sisters and brothers."

But what did he mean by that?

Every January we hear the soundbytes. "I have a dream..." I know you can hear his deep, resonating voice as you read that. You can't help but know his face and his voice. It's played over and over.

Martin Luther King, Jr. won the Nobel Peace Prize. For what?? For having a dream??? Lots of people have dreams!

Several years ago I started actually reading some of his speeches and writings. I was blown away! First of all, I don't remember anyone ever telling me that Martin Luther King, Jr. had a Ph. D. from Boston University. (I know he's called "Dr."...I guess I always thought that was out of respect for him.)

As I read his writings, I was amazed at how prophetic he was. (Please take the time to read some of the links I've included at the bottom. Insert the word "Iraq" for Vietnam when he talks about war. You'll be amazed at how easy it is to change the word and never know you're reading something from 40 years ago!). His eloquence and depth of knowledge was so insightful.

Last night Black Cinematheque at the South Dallas Cultural Center showed a 30 minute clip of an interview with Dr. King, taken from The Mike Douglas Show. Much like I had never read his whole speeches, I had also never seen Dr. King dialogue. With much ease, eloquence, and obvious depth of knowledge, he spoke with the two White men about much more than "having a dream."

Thinking I might find the interview on YouTube, I searched for it. Though there were many other Mike Douglas Show interviews...Tiger Woods, Frank Zappa, Muhammed Ali, Cher...Dr. King was not available. I then searched "The Mike Douglas Show" and found a link to media clips on their website. No Dr. King.

Why is it that there are videos for so many other "popular" people, but a clip that would allow us to see Dr. King as more than a soundbyte is not available?

His dream was so much more than that! Read the links at the end of this post. Think about what he says about war, poverty, paying people what they deserve, justice, segregation, peace, church practices, wealth, international politics. Then ponder whether or not King's dream has been realized. 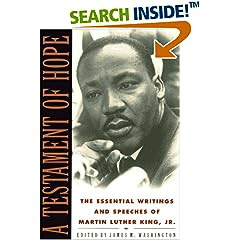 Martin Luther King, Jr. was so much more than the holiday or Black History Month allows us to see. To truly celebrate him, I would encourage you to take the time to read his actual words, let them resonate, and then figure out ways we can work toward making his dream come true.

Where do we go from here?: http://www.stanford.edu/group/King/publications/speeches/Where_do_we_go_from_here.html
Posted by Janet Morrison-Lane at 8:41 AM